Windows & Doors: Before & After

Installing new windows and doors on a home can be transformational and Bavarian is happy to share one of our remarkable before & after client transformations.

The homeowner — let’s call him George — came to Bavarian because he wanted to accomplish many different things with his home. The house was built in the 1990s and suited his family well, so they were intending to remain in their home for the long term. Not having done any exterior upgrades before, George came to Bavarian for expert guidance and recommendations on how best to achieve his goals.

After meeting with George to determine his goals and discuss his budget, we sent one of our team members to his home to take measurements and create a plan.

Our review determined the following:

Our plan was to upgrade George’s windows and door with the following solutions:

Install triple-glazed windows to enhance energy-efficiency and reduce exterior noise.
-The windows also featured a special UV coating to reduce heat transfer in the summer and harmful UV rays which can fade furniture, artwork, and carpeting.

Install windows that each had an easy-to-open mechanism.
-The new windows would allow for proper ventilation and airflow in the home, easier cleaning, and enhanced light.

Install hybrid windows to enhance the look of the home.
-These windows allowed for the exterior frame to be a dark, contemporary colour and the inside to be a lighter shade to match the interior design of the home.

Install a fibreglass single door with frosted sidelight.
-The new door allowed for a grand entrance and featured the latest multi-point locking mechanism to enhance their security.
-The frosted sidelight allowed for more light to enter their foyer while not sacrificing their privacy.

Bavarian installed 16 new hybrid windows and a new door with sidelight, and the result was amazing. The look of the home has completely changed and the functionality of the windows and door was enhanced.

Update: We are pleased to report that George is no longer finding his home drafty and he is saving money on his heating costs.

If you are considering updating your windows and doors, contact the professionals at Bavarian Window Works .

This site uses Akismet to reduce spam. Learn how your comment data is processed. 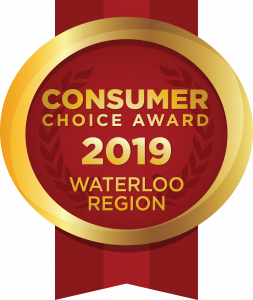 To further contain the spread of COVID-19, the Ontario Government has ordered the mandatory closure of all non-essential workplaces effective as of Tuesday, March 24th at 11:59 p.m.

This closure has impacted our business and, as such, we will be closing our retail showroom and providing builders and homeowners with supply only windows and doors for delivery or pickup.

You can still request a quote online, but measurements will not take place until the Ontario Government mandates that it is safe to do so. As soon as we are able to safely re-open, we will do so.

Get expert tips and tricks straight to your inbox